The drive from the airport to our hotel, Eurostars David, was quick and took us through some very nice neighborhoods then over one of the bridges that crosses the Vltava River. We were a bit early, but still able to check in, change and freshen up. Our room had a view of the “Dancing House,” which is a more modern building completed in 1996 and said to resemble famous dancers Fred Astaire and Ginger Rogers.

view of the Dancing House from our room

David in front of the Eurostars David

Even though we were exhausted, we forced ourselves to get out into the city. I was determined to make the most of our time, and that did not include naps. First we walked past the “Dancing House” and over to the river in search of a place to grab lunch. This little restaurant boat looks touristy, but many customers spoke Czech and one table was a group of guys who actually pulled their boat up to dock alongside the restaurant! I was already craving greens after #OMVBach (Olivia’s bachelorette party the previous weekend) – her recap over here – so I had a goat cheese salad (my favorite chèvre chaud from France as seen here and here … surprised I didn’t mention it more actually) and Dave got chicken risotto. Both were quite good, especially for just picking a random place! 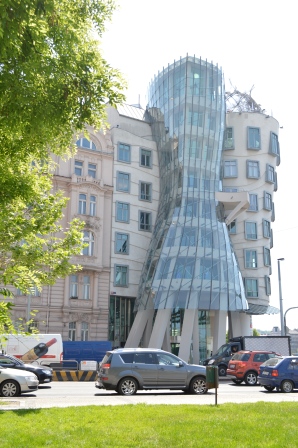 close up of the Dancing House

lunch on the Vltava River

Continuing along the river and marveling at all the paddle boats, we walked past beautiful gardens to the Petřín Hill funicular, where we bought tickets and rode to the top for a sweeping view of the city. At the top we were both in need of a restroom and quickly learned that they are not easy to come by, and it is nearly impossible to find a free WC. (I experienced the pay-to-pee situation both in France and Italy, but it was nothing compared to Eastern Europe. Dave was in shock though, “You have to pay to go?”) This bathroom – if you could even call it that – was really a run down hut guarded by a man who took your money before allowing you to enter into the dark and stinky cesspit. We were both a bit desperate though, and it did the trick.

From there, we bought our tickets for Petřín Tower and began to make our way up the steps, but only made it to the first observation platform. The second platform is almost 300 steps up, we were exhausted already and the view was pretty great at that level anyway.  (It is supposed to be a mini Eiffel Tower, but I prefer the real deal!)

gardens along the Vltava River 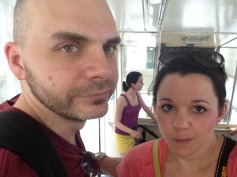 skeptical of the funicular 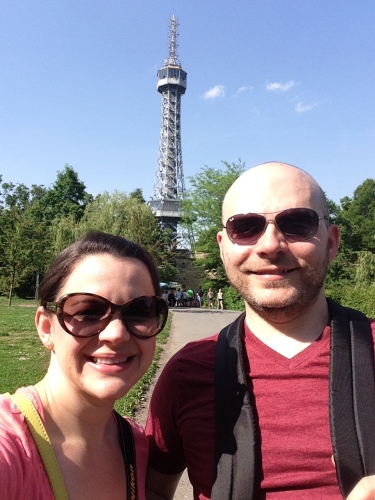 at the top of Petřín Hill

paddle boats in the Vltava River 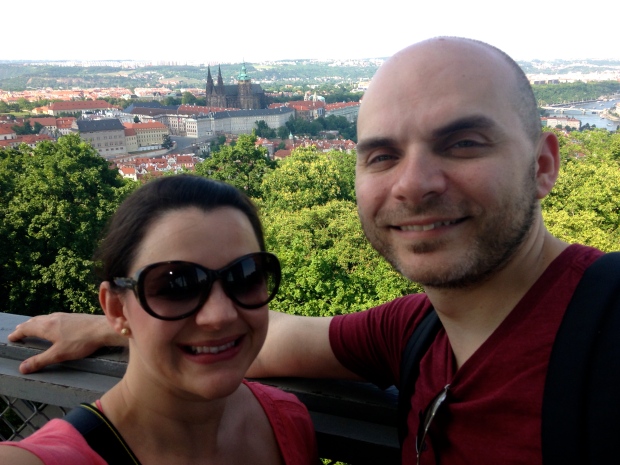 Walking back down the hill, we found the Memorial to the Victims of Communism at the base. It’s a series of statues that represent the diminishing effects the regime had on its many political prisoners between 1948 and 1989. As time passes, the body continues to decay and eventually the person disappears almost completely. The bronze ribbon running along the stairs between the statues is etched with powerful numbers estimating those who were victimized during the Communist era: 205,486 arrested, 170,938 forced into exile, 4,500 died in prison, 327 shot trying to escape, 248 executed.

Memorial to the Victims of Communism

Memorial to the Victims of Communism

Before evening we stopped at the hotel to change and then headed back out toward the Old Town Square for dinner and our walking tour. The streets all over Prague are cobbled, winding and narrow, giving it a very “Old World” feel. As we rounded another corner, we saw the Astronomical Clock and caught a glimpse of the square with the Týn Church peeking out at us. Dave was in awe; he’d never seen anything like it. To be honest it was pretty amazing, even compared to Place du Tertre or Piazza Navona. 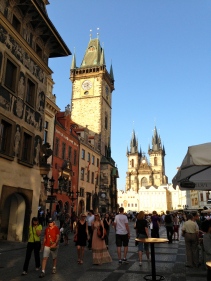 first view of the square 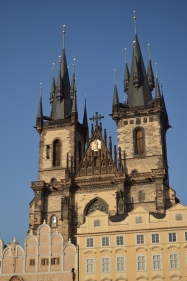 The Curch of our Lady before the Týn

After looking around at several of the square’s tourist trap restaurants, we settled on one that seemed to be the least touristy – Cafe Bílý koníček. (One restaurant directly next to ours wanted to charge 50% more just to be seated outside!) I had a white wine cocktail, Dave had a beer and we both had traditional Czech dinners – I chose beef, cranberries and dumplings and Dave had pork, cabbage and dumplings. (Their dumplings are not like ours, but look like slices of bread instead.) We ate and drank into the sunset and watched the people in the square – tourists, artists, musicians and a variety of interesting performances. 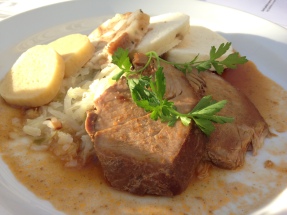 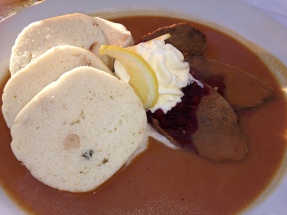 Soon enough it was time for our ghost tour. At this point, we had pretty much been up for over 24 hours, since we left PA for the airport the morning before. It was 8:30pm and the tour was expected to last two hours. We agreed that we may not make it through to the end and might slip away from the group to return to our hotel if necessary. When we met the group though, we found there was only one other couple so we realized that was not really an option.

Our guide was very knowledgeable,  enthusiastic and even dressed the part. He led us from site to site, recounting in his thick Slavic accent old tales of scandal and mystery that had been passed down through generations. As interesting as it all was, the two of us were struggling just to stay awake. During one story, Dave told me he fell asleep six different times with his eyes open! At the end of the tour, we took a picture in front of the Astronomical Clock with Peter and made a bee line for our hotel room.

Note to self: don’t schedule a nighttime walking tour on the first day of a trip! More to come …

Date night into morning. I don’t mean to brag, but this coffee was still warm when I finished it. #kidfreenight @vicevirtuecoffee @arrivehotels
Girlfriend loves to eat!
Such a great week of work and fun! Loved catching up with everyone, especially my #resisters (even though I didn’t get a pic of us together!) 💕
Cozy coffee vibes.
This is the newest face from our v expressive child. She makes it when she’s excited about something. Like #babyshark and okra 🤣Tonight though, the face came out when @frenchqtr99 was twirling his drumsticks 🥁
Garden planning, bbq and ice cream. Not a bad way to spend the day! 📷: @frenchqtr99
This girl loves music class 🎶 💃 📷 @musikadventures
One year ago today ... I looked up nearby psychiatrists and very quickly sent one a message, knowing that if I thought about it too long, I would talk myself out of asking for the help I so badly needed. • My heart was inexplicably beating so fast, I felt like my chest was going to explode. I just could not shake the feeling that something terrible was going to happen to Jo or to me. It was not the first time I felt that way, but it was definitely one of the worst. • When we met a week later, she confirmed that I was experiencing postpartum anxiety. We hear about postpartum depression — albeit not nearly enough — but there is very little awareness about other postpartum mood disorders. We’re also not always told about late onset in PPMD. • Now, a year has passed, and thanks to more regular sleep, support of family and friends, ongoing therapy, and medication, I feel much more like myself (although still a different self because motherhood!) But that doesn’t mean every day is a walk in the park (although these photos are, in fact, from a walk in the park). It takes work — and I’m doubtful that anyone could get through it alone. •⠀⠀⠀⠀⠀⠀⠀⠀⠀ So as someone who will do anything and everything not to appear vulnerable, I am sharing my experience because we don’t talk enough about the hard things. And I think we would all benefit from opening up about our fears. • If you’re struggling, ask for help! I *know* it’s not easy, but in my experience, the second you send the email or make the call, there is an instant feeling of relief. Something about putting your truth into the universe is incredibly freeing ... • If you know someone who might be struggling, speak up if you think they seem even slightly off. Sometimes it just takes the right person asking (maybe even more than once) at the right moment: are you ok? •⠀⠀⠀⠀⠀⠀⠀⠀⠀ #mentalhealth #postpartumanxiety #momtruth #postpartummooddisorder
NYE 2009/NYE 2019 🥰🥰🥰