The Lam Fam cruise put me back into DC the night of November 22, and with the possibility of a job at Ann Taylor Loft, I wanted to stay in town in case I was needed for Black Friday. Mom and Dad weren’t thrilled that I was choosing not to come home for Thanksgiving, but I was enthusiastic about my Turkey Day plans.

Up here in DC we have a huge Aggie group and as many of you know, Thanksgiving is the time for our big rivalry game with t.u. This year about 20 of us met up for a potluck meal, lots of beer, and the Aggie spirit. It was by far the best Thanksgiving I have ever had – sorry Mom and Dad! 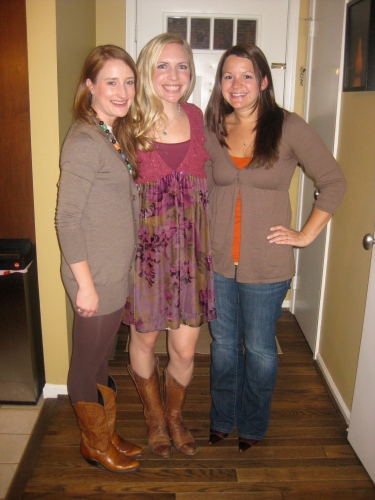 My day started at my friend Steve’s apartment with mimosas, the Macy’s parade, and some mad side-dish preparations. We volunteered mashed potatoes and mac n’cheese, but these were no regular potatoes and pasta sides. The mashed potatoes were actually a casserole recipe from my friend Emily’s mom, which includes sour cream and cream cheese – not for someone on a diet – and the macaroni had an extra kick with some pepper jack added to the mix.

As luck would have it, two of my Continental friends had layovers here, and since Will wasn’t doing anything with his family in MD, he made his was to VA and they all joined our Aggie party. 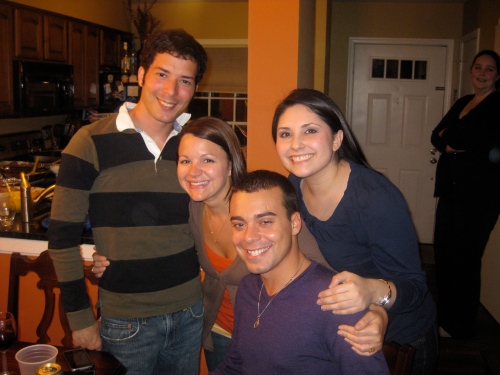 The festivities were held at Josh’s townhouse in Arlington, so after finishing up our contribution to the meal, we made our way over. Aggie basketball was on, and of course the Dallas Cowboys! It was the perfect combination of food, drink, friends, and sports. The only thing lacking in my day was a nap, but with all that was going on, I didn’t want to miss a thing. Around 7 we offered our thanks and began to eat. After an entire night of brining, Josh’s turkey was the best I’ve had, and because each side dish was carefully made by its creator, everything tasted incredible. From now on, I believe that potluck meals are the way to go – people usually make their best dish and they really put the effort towards it.

a smorgasbord of food 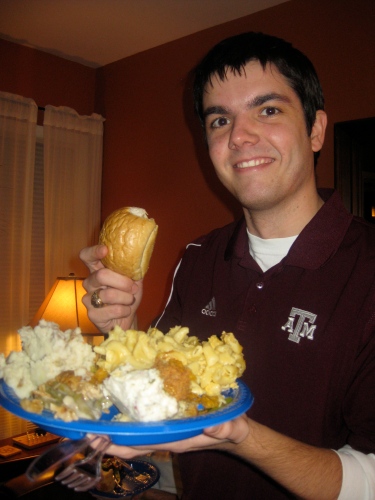 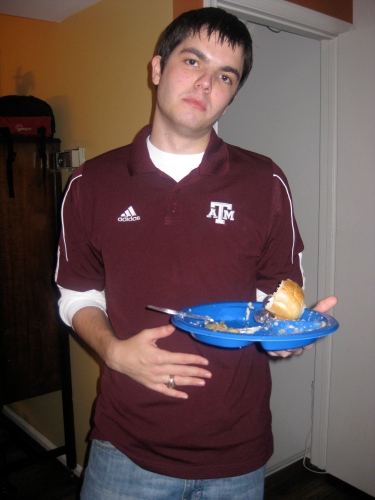 visions of sugarplums danced in her head… 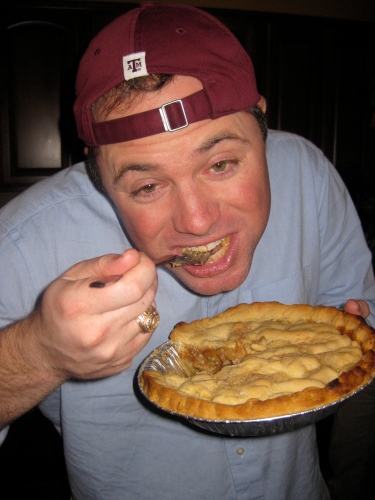 Just before the Aggie game started, Josh brought out his iPod and played the Aggie war hymn. Although we did not win, we made a great effort, and for that I was thankful. The day was full of cheer and definitely included a merry feast. I am blessed to have such wonderful friends in DC and back home.