Not long after I moved to DC, my friend Jonathan and I went to a film screening at the French Embassy. The film, Marching Band, was directed and produced by a French man who always held an interest with US marching bands. For ten years he has wanted to introduce these organizations to the French through film, but he didn’t know what the main topic would be. As the 2008 presidential election neared, he discovered his topic. He followed the lives of band students at UVA and Virginia State University during the last three months of the campaign, documenting their views and reaction to the outcome. Before the film began, we mingled through the crowd with complimentary wine and assorted cheeses. Inside the screening room we heard from those involved in the filming and directing, as well as from a few of the students, who were present at the embassy. We both thoroughly enjoyed the film, and hope that it will eventually be available for purchase. 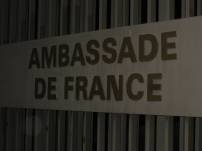