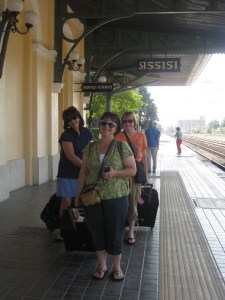 we arrived in Assisi mid-morning, very pleased with our hotel, which was listed by rick steve’s. our room overlooked the terrace with a fabulous view of an Umbrian valley below. the location was just steps away from the main piazza where you can find the temple of Minerva. 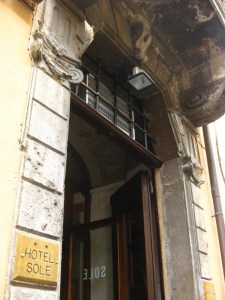 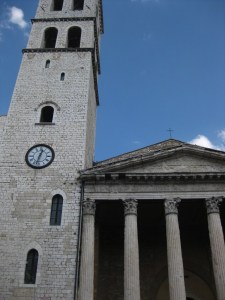 As we continued walking from piazza commune towards st francis’ basilica, we stopped to shop, searched through little niches, finding some amazing views, and talking with locals… one man told us the story of how he fell in love with an American – they were engaged but “divorced before they ever married.” He also told us of a couple from Austin, the reason texas is “going away from his heart.” He wanted to sell the store and they were interested. After back and forth on the phone between usa and italy, he paid for them to come to italy, put them up in a hotel, took care of all meals and sent them out on private tours of the region. The couple ended up buying another store in Assisi for almost three times his asking price without so much as a thank-you. Mom and grandma accidentally wandered into their gallery/store a little later but didn’t say anything to them about giving texas a bad rap. 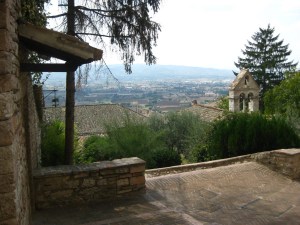 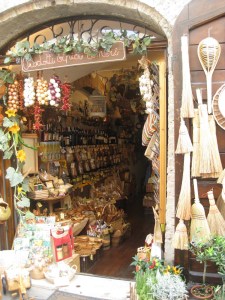 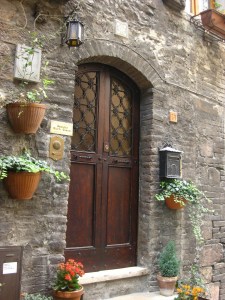 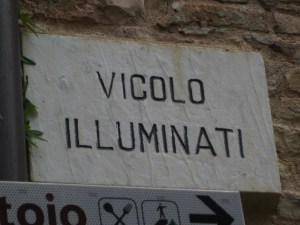 We reached the basilica (almost) and mom and gma decided they didn’t want to go up anymore hills so they stayed back sitting on a bench. Joann, gaylyn, and I entered the upper basilica first, which was built second. The colors were bright and vibrant, creating a cheery upbeat mood. Patches of gray could be seen where the 1997 earthquake did its damage. We sat for a while appreciating the artwork before heading to the lower basilica which has a very interesting story. 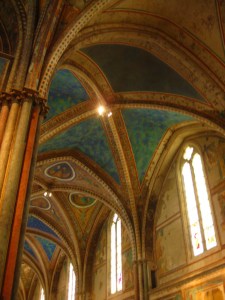 The walls running parallel along the nave were created to show images of christ’s life mirroring those of st. francis. However, after the church was built, side chapels had to be added for the rich families of the community. So arches were cut out, removing certain scenes, including the ones following Christ being taken down from the cross, his resurrection.  This interruption in the storyline gives the appearance that the story ends there, but if you look at the wall opposite this void, you can see st. francis preaching to the birds. Rick steves’ says this image serves as hope and a reminder the the message is still alive. 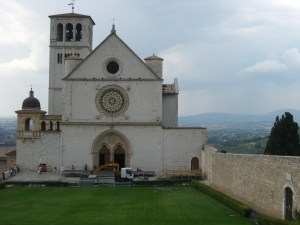 Below this lower basilica is the tomb of st. francis, where the only real candles in the church are donated by visitors and then lit later by the Franciscans. After touring the relic room we headed out and then back towards the town center. We decided to try a different way, which turned out to be a bad decision because it must have been the hilliest path.
Back at the hotel we sat on the terrace for a while, drinking wine and writing postcards that I never did send. With the surroundings it is easy to understand the “pace e bene” of the town. 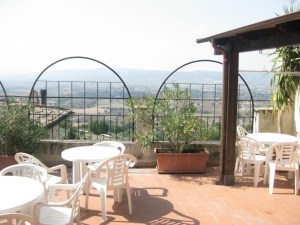 Mom and grandma were still not back, but we ran into them just as we got down to the street, which was then I met lisa… I peered down into a little basement gallery and saw a woman painting intensely. as I took a picture she looked up and invited me down into her studio. She had many rooms of paintings and I fell in love with one of artemis. It tortured me the rest of the night as I contemplated whether or not to buy it. Lisa is from Canada and has gone back and forth for the past six years but she feels like italy is a place that really encourages and fosters art as a profession rather than just a hobby as we do in north America. 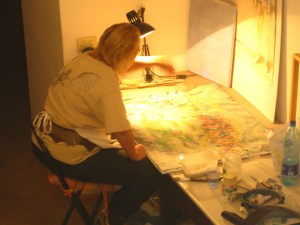 Even though we were hungry, we had some time to kill before the restaurant we picked for dinner was to open. We opted for a snack of gelato by the fountain and then we visited a market recommended by rick. We snacked on different spreads made from olives, asparagus, and roasted peppers to name a few.
The restaurant we ate as was another rick recommendation, but I wouldn’t go back. The food was good – I had gnocchi, like I did in piazza navona – but the service wasn’t, and the wine was horrible! The other girls sent theirs back but were still charged for it and the server didn’t even try to find a replacement they would like!
Later that night joann and I went to a café that offered free internet to its customers. We had great wine and got our e-mail/facebook fix. On the way back I looked to see if lisa was still at the gallery working. I told myself that if she was there and could find a way to ship me the painting then I was going to buy it. Guess it wasn’t meant to be because all the lights were off and the door closer. She does however have my email and I will see what we can work out if I hear from her.
(since we’ve been back I have searched online for lisa and actually found her blog, but I can’t afford the painting right now considering I don’t have any income. I might get it for myself though if she still has it after I have some time to save up!)