my vacation days were assigned for february and along with my regularly scheduled days off, i was able to get almost two weeks off at the end of the month. i spent the first part in panama city beach, florida with the grandparents, whom i hadn’t seen since before i left for france last year! i was reminded how terrifying it can be to be a passenger in the car with grandpa – the world is out to get him! all in all it was a very relaxing vacation and i was even able to get a little sun!

the view from our balcony
the second half of my vacay was spent in belize with other flight attendants. our group included two of my roommates, maritza and tim, and three other flight attendants william, matthew and jason. we also had matt’s boyfriend tj, maritza’s boyfriend jason, and maritza’s sister osiris. we were 9 total and ready for some fun in the jungle! we had such a great trip and thanks to will’s grandparents we were able to do a lot for a very low price. william/will/wilma is like our 5th roommate and his grandparents own a lodge in the jungle of belize called banana bank.

everyone got first class on the flight down meaning our day started with screwdrivers and other various cocktails. when we arrived the rental van wasn’t quite ready so we went to the airport restaurant bar. after a little noshing, beer, and tequila shots to start off the trip we were ready! on our way to the lodge we made a couple pit stops for bottles of rum and beer by the case, arriving just in time to unpack and go to dinner. that night i ate the best enchiladas i’ve ever had – and i’ve had a LOT in my life! meals are served family style and all are freshly made from scratch. 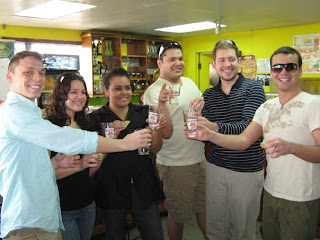 tequila shots at the airport!

our chalet: we had the whole top floor

the “restaurant” where we ate our meals

wilma’s grandparents have a variety of animals at the lodge including a jaguar named tica, chico the spider monkey, and many different birds.

tuesday we went on our first adventure – cave tubing! our guide albert is a certified belizian tour guide. as we hiked through the woods he stopped to show us various plants while explaining their medicinal purposes. as his appointed group manager, i was told that i had to try everything he did. my only rule was that i would not eat bugs… the river water was crystal clear and we stopped at various spots to jump off cliffs or swing from the trees. albert taught us a lot about the mayan beliefs and that they would come to the caves to make sacrifices. currently we are in the corn world and the mayans predict that it will end in 2012. 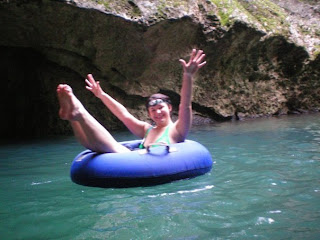 wednesday we visited the mayan ruins of caracol. albert taught us more about the natural resources in the forest, including a fruit that can be used for glue, a warrior ant that can be used as a temporary stitch, and termites that are eaten for protein. (yes i broke my own rule and ate the minty flavored little things!)

the “claws” at the head of the ant is holding the skin together, and you just pinch off the rest of the body

the sap-like juice from this fruit is used as glue

down in one of the mayan tombs

after leaving caracol we stopped for lunch and a swim at a beautiful waterfall spot. the boys swam with the leaches while the girls stayed out of the icy water, relaxing on the rocks. 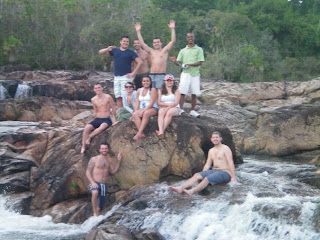 thursday was our last full day in belize and snorkeling was on the agenda. we got up very early to drive into belize city and catch the water taxi to san pedro. we grabbed breakfast tacos, fresh squeezed orange juice, and nescafe at a little stand before boarding the boat. once we got to the caye we took a taxi to banana beach where we got our gear and headed out to the reef. we were able to see barracuda, whale sharks, sea turtles, moray eels, and much more… we even touched the stingrays! we ate lunch afterwards in the little town of san pedro – i had a belizian specialty rice and beans topped with fish and a side of potato salad. (you can also have chicken or beef.) we walked around looking at the little souvenir shops and even grabbed some fresh mango sorbet.

maritza and me on the boat to san pedro

the jasons looking at the sharks in the water

tim and me at the sorbet shop

walking the streets of san pedro

back in belize city, we took the local bus to a town closer to the lodge. the idea of taking the local bus seemed a little shady but we jammed out to the music playing over the loudspeaker and admired the beautiful countryside as the sun was setting. that night we planned for a farewell party by the pool but everyone fell asleep right after dinner, exhausted from our adventures of the days before. the trip was amazing and i suggest it to anyone looking for something a little out of the ordinary!

tim and me on the local bus